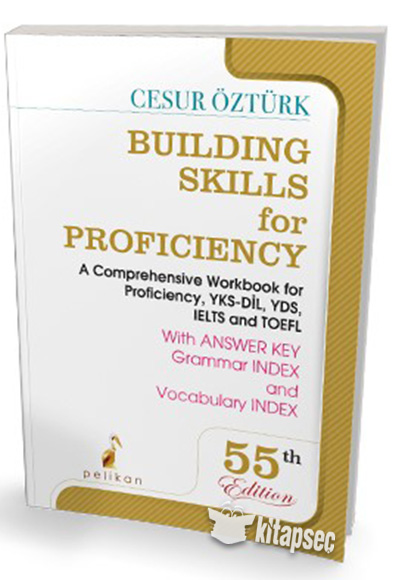 This book is intended for intermediate and advanced learners of English who are preparing for examinations in English, such as English proficiency examinations given by Turkish universities, YDS (Foreign Language Test), IELTS and the TOEFL. It also covers a lot of material which is relevant to Cambridge Proficiency Examinations. While it may be used in a classroom situation to teach grammar, vocabulary and reading comprehension, it is basically a self-study book.

The material in it is so designed that it ensures steady progress towards mastery of English. Its major components are grammar, vocabulary and reading.

Major grammatical patterns are dealt with thoroughly, and learners’ ability to recognize these patterns is improved through unit by unit tests aimed at reinforcing the structures taught. While answering test questions, learners may refer to the original examples related to the testing point by means of the page references given in the key to tests.

Vocabulary is presented in two parts: Part 2 and Part 3. Part 2 covers basic academic vocabulary needed for proficiency examinations given at Turkish universities. The vocabulary items included in this part have been selected on the basis of their frequency, range and usefulness. These words have been arranged according to the frequency of occurrence as far as possible. Important words are recycled, i.e., used in different contexts cyclically in subsequent sections to make sure that learners remember what they mean.

Part Three contains advanced academic vocabulary. Though the words in this part are, on the whole, less frequent than those presented in Part Two, it is essential to know the meanings of these words in order to understand more advanced texts.

Reading comprehension is taught systematically by focusing on all the important skills involved in the reading process. Great care is taken to make this complicated process easier for learners. It is hoped that the exercises provided and the suggestions made in the book will facilitate reading comprehension and enable learners to understand and answer reading comprehension questions better. In some texts, important academic words are printed in bold type to draw learners’ attention to them.

It is worth noting at this stage that to derive maximum benefit from this book, learners are strongly advised to do wide reading. Reading will reinforce not only grammar but also vocabulary items presented in this book, making the book more effective than it would otherwise be.

Sample tests will give learners a chance to test their linguistic competence. If they discover that they are weak in a certain section, they can study the relevant sections more intensively.

The material in the book has been selected with utmost care and is based on a wide range of sources including test books, grammar books, vocabulary books, dictionaries, various academic course books, newspapers, magazines, such as  Time and Newsweek and two major sources of news media, the BBC radio and television broadcasts and CNN International.

Users of the book are advised to read English newspapers and journals on the Internet. Suggested media sources include the Independent, the Guardian, the BBC News, the New York Times, the Washington Post, the Los Angeles Times, the Economist, New Scientist and Scientific American.

likely to encounter in authentic texts. It is the author’s hope that the book will contribute to English Language

The book has been reviewed and revised meticulously for the 47th edition. Minor changes have been made in the subsequent editions, including this new edition. It is a reliable source that you can use in your study of English.

The idea of writing a book was first suggested to me by my dear friend Lütfi Yalçınkaya, to whom I owe my heartfelt thanks for encouraging me to attempt such an enormous task.

I would like to thank Professor Sabri Koç for teaching me how to use a computer, which made it possible for me to design this book and make any necessary changes in it. I’m also grateful to my colleagues who have read and commented on the linguistic and/or pedagogic aspects of certain parts of the material.

I would like to express my deepest gratitude to Retired Associate Professor Joshua Bear at the Department of Foreign Language Education at METU, who has made a significant contribution to this book by doing a great deal of proofreading and clarifying troublespots. He has also provided me with extremely useful books, from which I got many good ideas.

I am most grateful to my colleagues at the Departments of Basic English and Modern Languages at METU for recommending the book to the students of METU and making valuable suggestions for the first edition.

I’m greatly indebted to Füsun Hepdinç, my dear friend from Hacettepe University, and the members of the teaching staff at the School of Foreign Languages of Hacettepe University for recommending this book to their students and using it in their courses.

My greatest debt is to Mehmet Ali Erkiner, who passed away in 2015. He not only made extremely useful suggestions but also gave the book a thorough proofreading. The book has taken its present form thanks to his meticulous care and painstaking exactness.

I wish to extend my thanks to the staff members of Gülhane Military Medical Academy who volunteered to act as a pilot group in testing the effectiveness of the material before the publication of the book in 1994.

I must say a special thank you to Retired Professor Türker Mirata from the Department of Civil Engineering at METU for his meticulous proofreading and excellent suggestions, which enabled me to correct a great many misprints which had gone unnoticed in the previous editions. I would also like to thank my dear colleague Kenan Çelik from Çanakkale, who has proofread the 54th Edition of the book and detected a number of minor errors which appear to have resulted from some changes made in the content and format of the book in some previous editions. Thanks to his invaluable help, I was able to correct them for the 55th Edition.

My thanks also go to Neşe Aydoğan for helping me with the typesetting of the material in her spare time. Moreover, I am thankful to Ümmü Kurt for helping me prepare the book for the five previous editions and Utku Çetin for contributing to the new editions.

Finally, I would like to express my appreciation to my wife Nuray. Without her support and encouragement, this book would never have been completed.